The State of Connecticut has created a program to help address the loss of property tax revenue that municipalities experience due to certain types of tax-exempt property. The program is called Payment in Lieu of Taxes (PILOT).

Sections 12-19a and 12-20a of the Connecticut General Statutes, which define the PILOT program, appear to have been created in the 1970s. There have been numerous changes to each section over the years, including what is covered and the formula used to calculate the grants.

Information from the Open Connecticut Data website shows that the overall PILOT program has been about a $200 million line item for the State over the past 10 years. 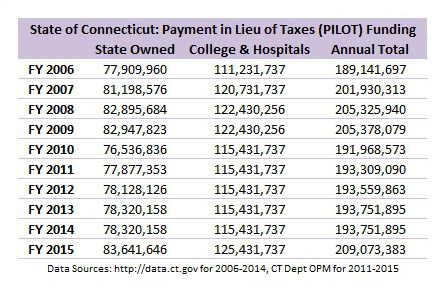 However, the PILOT program is not fully funded. The municipalities that request reimbursement only receive about half of the amount they request according to the Department of Operations, Policy and Management.

The reimbursement percentage that each municipality receives varies based on their mix of qualifying property types.