The basics of a Municipal Bond are straightforward. The City borrows some money, pays interest while using it, and then pays it all back on the due date.

The reality of the bond markets is more complicated. As an example, consider the Bond issue that Hartford did in April of 2011. The City issued $25,000,000 in debt in the first half of 2011.

Page 2 of the Offering Statement showed that the issue was actually a series of 13 bonds. The first 12 were scheduled to come due each April 1st beginning in 2013 and ending in 2024. The face value of those notes was relatively constant each year, and the coupon rate varied between 3.00% and 5.25%.

The final bond was written to be due on April 1, 2031 with a face value of approximately 7 times as high as the others. The final bond also included a mandatory sinking fund provision that forced the principal to be paid off in 7 equal annual installments on April 1 of 2025 through 2031.

Each bond is an individual financial security, with it’s own unique ID called a CUSIP Number. Each bond can be bought and sold independently of the others in the series. 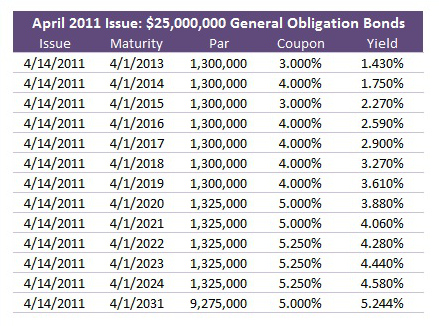 Because the coupon rate for most of the individual bonds in the series was above the market interest rate at the time (yield), the proceeds from the overall issue was higher that the $25,000,000 face value of the debt. The proposed Sources and Uses table on page 10 of the Offering Statement (numbered as page 8 in the document) shows that the proceeds totaled $25,609,052.

One way to understand the debt issue is to plot the annual principal and interest due on the series of bonds. Interest is highest in the early years, because interest is due on all of the individual bonds in the series. As time goes on, some of the bonds come due and the City pays off the principal. Paying down the principal causes the annual interest to fall. 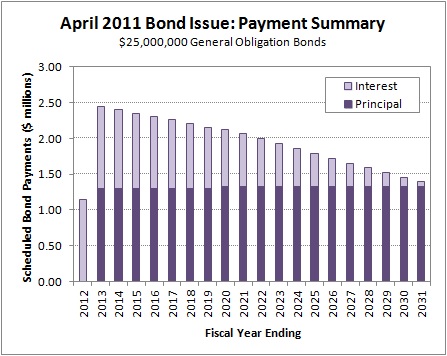 Note that the annual principal payments remain constant throughout because of the mandatory sinking fund provision placed on the bond due in April of 2031.

Principal repayment for the $25,000,000 in debt was to be paid off in roughly equal installments over 19 years.