In the spring of 2013, Hartford raised $140 million to restructure the City’s debt by issuing general obligation bonds.

The face value of the new issue was $124.6 million, and an additional $15.6 million was received as a premium from investors because the coupon rate was above market interest rates at the time. Net proceeds were used to pay off previously issued debt.

The chart below shows the scheduled general obligation bond payments beginning in fiscal 2014. The City’s debt profile as of June 30, 2012 is shown in green in the background. On top of that data series, the purple bars are the City’s new debt profile after the refinancing. 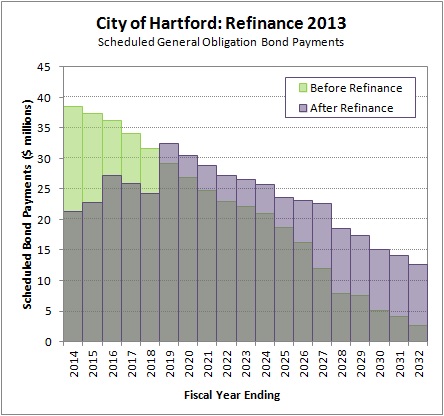 The effect of the restructuring was to delay maturities, extending the due date for a meaningful amount of the City’s general obligation debt well into the future.

Years 2014 through 2018 all have green column tops. The amount of green shows how much less Hartford owed in each year. For example, in 2014 the scheduled payment fell from about $38.5 million to about $21.3 million.

Years 2019 through 2032 all have purple column tops. The amount of purple shows how much more Hartford owed in each year. For example, in 2032 the scheduled payment rose from about $2.6 million to $12.7 million.

Issuing new bonds to pay off older bonds early is a common strategy for managing debt. It is especially effective when the interest rate of the debt can be lowered.

In this case, there was not a meaningful difference in interest rates. The coupon rates for all the bonds paid off early were 5.25% or below. The coupon rate for the majority of the new 2013 bonds issued was right at 5%.

One thought on “2013 Debt Restructuring”