As of June 30, 2013, the end of the City’s fiscal year, Hartford’s General Obligation debt included scheduled payments through the fiscal year ending in 2033. 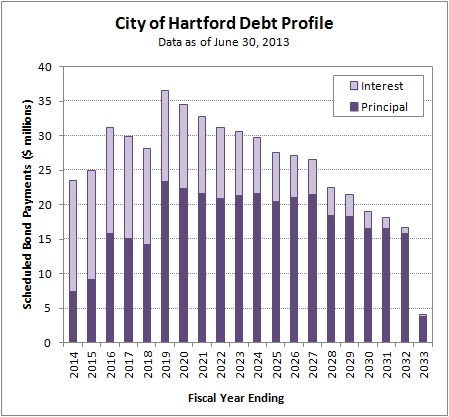 Hartford’s total debt was increased and restructured in the spring of 2013. The chart below compares the forward-looking debt service to the historical payments. 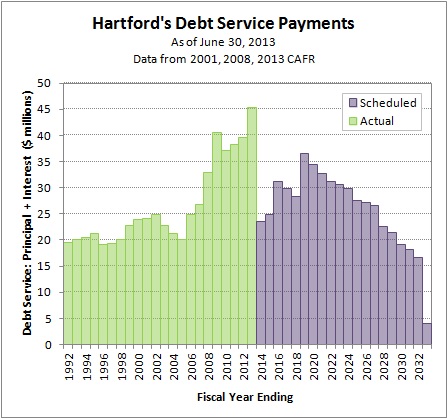 The distribution of Hartford’s future debt service payments was modified during the 2013 debt restructuring. A spike in debt payments was scheduled to come due during the current decade; see the City’s debt profile as of June 2012 as a point of comparison. Some of those debts have been retired over the past few years. Much of the remaining obligation has been deferred to the decade of the 2020s.

Note that the Comprehensive Annual Financial Report for 2013 shows both the newly issued bonds and the bonds that were paid off early in the audited financial. This overstates the amount of debt the City owes by over $100 million, making the CAFR’s tables and exhibits very misleading. There is an accounting technicality involved that is explained in Note 8 on page 70 of the pdf.