As of June 30, 2014, the end of the City’s fiscal year, Hartford’s General Obligation debt included scheduled payments through the fiscal year ending in 2033. 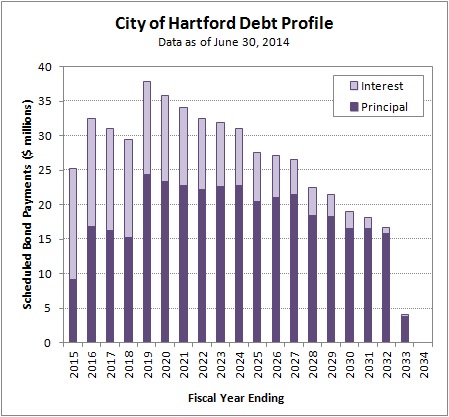 There was no public debt issued by the City during the fiscal year that ended in June of 2014. However, the projected debt payments have changed since the June 30, 2013 long-term debt analysis.

Hartford Treasurer Adam Cloud stated that the $10.25 million issue was a private placement with Bank of America that did “not require an official statement” on the EMMA website, and that the funds were used for “various capital projects.”

Note that the Comprehensive Annual Financial Report for 2014 shows both the refunding bonds and the refunded bonds from the $124.6 million 2013 debt restructuring. This overstates the amount of debt the City owes by over $100 million, making some of the CAFR’s tables and exhibits misleading. There is an accounting technicality involved that is explained in Note 8 on page 64 of the pdf.