Shortly after issuing $82 million of bonds in October of 2014, the City brought another round of debt to market in November of 2014.

Hartford raised $40.5 million total, with a face value of $36.4 million and premium of $4.1 million. The purpose of the issue was to refinance previous debt, and the Official Statement noted specifically which existing bonds would be refunded.

In a press release that accompanied the two late 2014 issues, Treasurer Adam Cloud stated that the November 2014 issue was “expected to produce approximately $2 million in debt service savings.”

The chart below shows the impact of refinancing on the scheduled debt payments. Unlike the April 2013 restructuring, the before data (green) and after data (purple) line up almost exactly. There was no obvious impact of the refinancing at the big picture level. 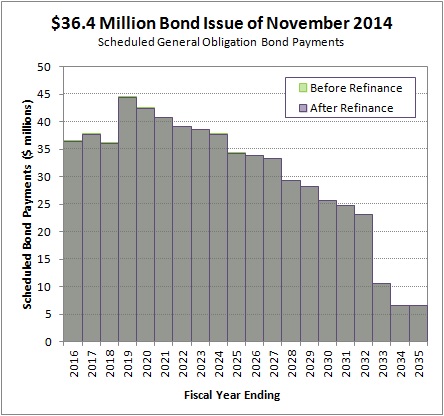 The table below compares the annual maturities side by side. The approach of this refinancing was to substitute new bonds of approximately the same face value, but with different coupon interest rates. Green font in the table signifies new issues with a more favorable term; either a lower face value or a lower coupon rate. Red font signifies a less favorable term for the new issue. 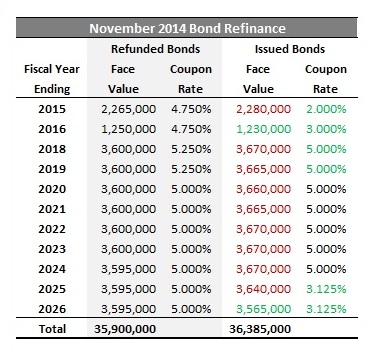 The impact of the refinancing is difficult to calculate with precision. There is subjectivity in how to treat debt payments that extend more than a decade into the future. Treasurer Cloud felt the offering would save the City “approximately $2 million” over 12 years.

The Hartford Citizen’s analysis of Hartford’s General Obligation debt was performed using a spreadsheet created to match the information shown in the annual audits (Comprehensive Annual Financial Reports). The model estimated total debt service savings of about $1.2 million over 12 years.

The estimate included the additional $485,000 in principal payments added to the debt, and summed future cash flows without discounting them (which maximized the value of future savings). The estimate did not include the $327,000 in underwriting fees paid to the investment bankers, which would bring the estimated savings below $1 million.