Hartford’s elected leaders restructured the City’s debt in March 2013 in an attempt to address a structural budget gap. It was an effective way to address short-term concerns, but will ultimately be an expensive temporary measure as the bill comes due. 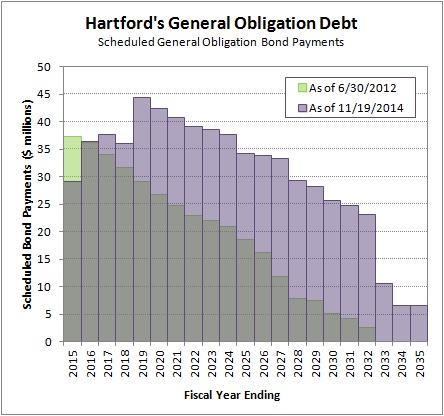 The Hartford Citizen’s model estimated that Hartford owed about $29 million in the current fiscal year (fiscal 2015). This total is over $8 million less than the City was scheduled to owe as of June 2012. The decrease illustrates the impact of the restructuring.

While arguably an effective short-term strategy for balancing the budget, postponing debt into the future is a poor long-term strategy. The debt will ultimately need to be repaid, with interest.

Since fiscal 2004, the City has averaged $39.4 million in new debt issued per year. It is highly unlikely that Hartford will stop issuing debt altogether in order to pay down the current balance.

The chart below shows the year-by-year totals, and excludes debt used to restructure or refinance. So far this year (fiscal 2015), Hartford has issued $82 million in debt, more than double the average of the 2004 to 2015 time period. 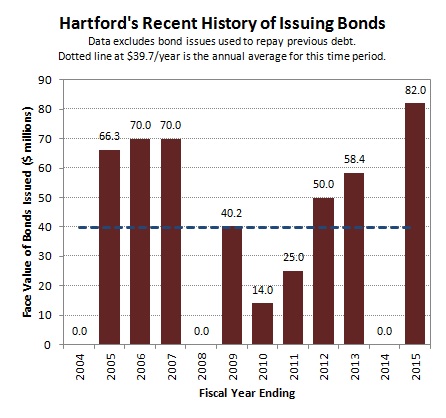 When a person, or a company, or a municipality borrows money, they need to have a plan pay it back. Money is not free.

Borrowing money can delay expenses, but it cannot reduce them. Loans are not a long-term solution to a structural budget gap. Additional debt will make a persistent budget deficit worse.

How do the City’s elected officials plan to pay back the money Hartford already owes?