In October 2014, the Hartford City Council approved the construction of a minor league baseball stadium as part of the Downtown North redevelopment project. The Hartford Stadium Authority was created in January 2015 to oversee the facility, and was empowered to issue debt.

The Hartford Stadium Authority raised $63.4 million via two bond issues in February 2015 to fund construction. Taken together, the debt was structured to be repaid in annual installments of about $4.26 million until the City’s fiscal year that ends in June 2042. 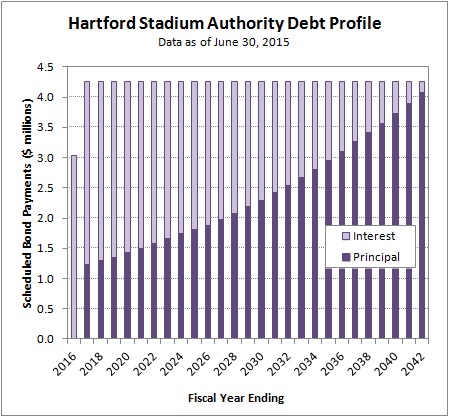 The debt is backed by a lease that the City of Hartford signed with the Stadium Authority. Scheduled rent payments, as shown in page 12 of the Official Statement, are intended to match up exactly with debt payments.

Two series of bonds were issued to fund construction because a portion of the costs did not qualify for the tax-exempt status that municipal governments usually receive. Tax-exempt bonds totaled $39.1 million in face value, and were issued at yields of between 1.23% and 4.15%. The remaining $23.4 million in face value was determined to be subject to federal taxes, and was issued at a yield of 5.625%.

When asked why a portion of the debt was issued as taxable, City Treasurer Adam Cloud explained that the public infrastructure created during stadium construction is tax-exempt. However certain things, like luxury boxes/suites, are private use and are required to be financed on a taxable basis.

Debt service on the stadium is structured as a fully amortizing loan. The City, via the Stadium Authority, will make equal payments every year until the construction costs have been repaid. Although the underlying bonds have a wide range of maturities and yields, the overall strategy is directly comparable to how individuals finance residential real estate purchases.

Converted to the terms of a fixed rate mortgage, the City borrowed $62.45 million, using a 27 year loan, with an interest rate of 5.0%.