The first round was in October, when the City raised $95.1 million in an issue with $82 million in face value and $13.1 million in premium. According to the Official Statement, the proceeds were earmarked for “various public improvement projects” and “the City’s portion of various school projects.”

A press release issued by Treasurer Adam Cloud about the pair of bond offerings stated that the City received “its lowest borrowing cost in decades” at an effective interest rate of 3.11%. 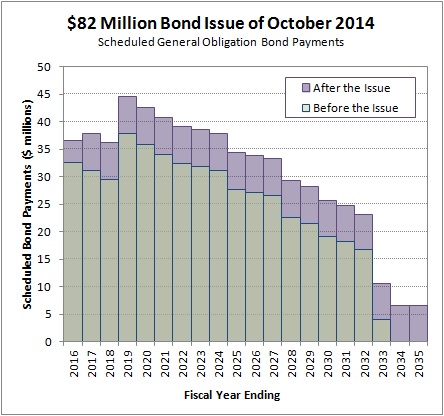 The purple tops of the bars show the amount of this issue to be repaid in each fiscal year. Payments were extended by two years, and about $6.5 million in annual debt service was added to fiscal years 2017 through 2035. If the bonds were held to maturity, the City would repay $130.8 million over 20 years.