Municipal bonds are usually tax-exempt. This is an advantage for cities, as interest rates are lower on tax-exempt bonds.

The last two debt issues by the City of Hartford have included a portion of the overall borrowing that did not qualify for tax-exempt treatment, raising the overall cost of borrowing.

Treasurer Adam Cloud stated that the City’s debt can only be refunded once with tax-exempt bonds. Subsequent refundings (of the same debt) are required to be taxable.

How do the maturities of the Refunding bonds compare to the Original issue bonds?

The City’s debt profile can be separated into refunding issues and original issues. In the chart below, the original issues are shown in blue on the bottom. Refunding issues are shown stacked on top in red. For both series, the darker portions of the bar represent scheduled principal payments and the lighter portion represents scheduled interest payments. 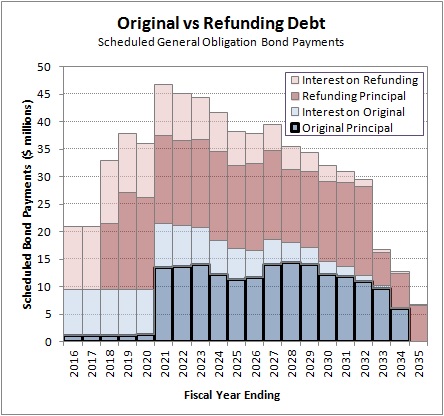 There are virtually no original issue principal payments due through fiscal 2020 that could be restructured using tax-exempt debt.

How much higher is the taxable interest rate?

The July 2015 issue included both taxable and tax-exempt bonds. Plotting the market interest rates from the Official Statement allows a rough yield curve to be drawn, comparing interest rates based on maturity and tax classification. 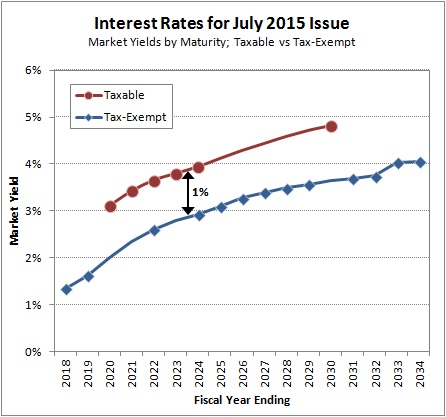 The market charged Hartford a 1.0% higher interest rate on the taxable debt than on the tax-exempt debt.

If Treasurer Cloud’s statement is accurate (and complete), then the sharp increase in refunded debt over the past 3 years has important implications.

The City has very little near-term debt that can be restructured with tax-exempt bonds. And the financial markets charge meaningfully higher interest rates for taxable bonds compared to tax-exempt bonds.

Future debt restructurings will be much more expensive for Hartford than they have been in the recent past.