The City of Hartford began the 2015-2016 fiscal year with a $78.06 million debt issue intended to help balance the current year budget by deferring payments. 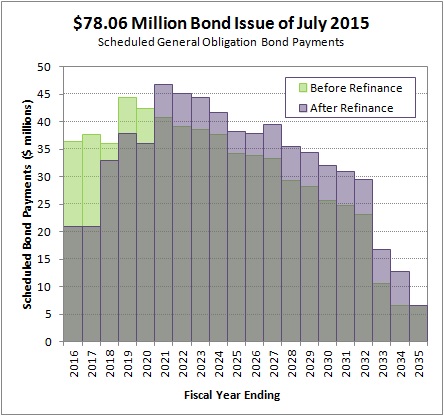 The primary goal of the restructuring was to dramatically lower debt service payments in fiscal 2016 and 2017. The Hartford Citizen model shows cash savings of over $15 million and $16 million for the two years, respectively. Cash savings are projected to be more modest in fiscal 2018 – 2020. Again, the green tops on the bars represent savings.

In exchange for reducing the near-term debt service, the City took on additional payments of between $4 million and $6 million in each year from 2021 through 2034. Those are the bars with purple tops in the chart. The change to 2035 was negligible, and no debt was added for fiscal 2036.

$20.8 million of the $78 million in debt raised in July 2015 was issued as taxable bonds. When asked why the bonds didn’t qualify for tax-exempt status, City Treasurer Adam Cloud stated that IRS tax law only allows tax-exempt bonds to be refinanced one time with tax-exempt bonds. Further refinancings are required to be done with taxable debt.

The July 2015 debt restructuring provided the City of Hartford financial relief in fiscal 2016 and fiscal 2017. At the same time, it continued a recent trend of postponing debt, and highlighted an additional cost for future restructuring efforts.

One thought on “July 2015 Debt Restructuring”