Motor vehicles are taxed at the municipal level in Connecticut. The City of Hartford’s mill rate is the highest in the state, at 74.29 mills in the current fiscal year. Hartford residents, therefore, pay the highest car tax rate in Connecticut.

The vehicle tax calculation begin with a State-provided schedule that gives a car’s market value based on its year, make, and model. It is an automated step that does not allow municipalities to make adjustments for a vehicle’s condition.

Motor vehicles are assessed at 70% of the market value, and the mill rate is applied to the assessment.

Vehicles are constantly being added to, and removed from, the tax roles. The City Assessor’s office provided a snapshot of the vehicles that were registered in the City on October 1, 2013, which is the valuation date for Grand List 2013. 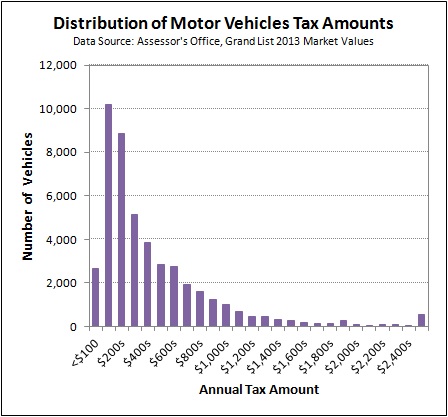